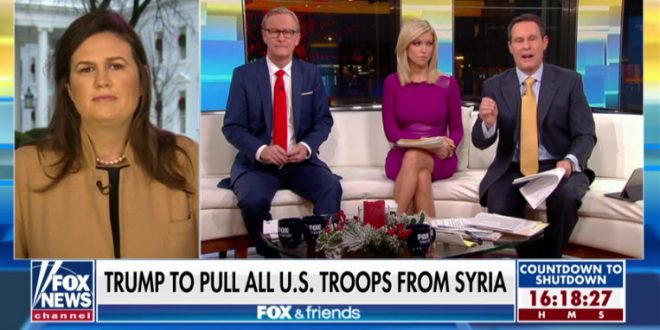 “Fox & Friends” co-host Brian Kilmeade on Friday said President Trump had “re-founded ISIS” and was giving Russia “a big win” with his decision to pull U.S. troops from Syria. Kilmeade made the remarks during an interview with White House press secretary Sarah Huckabee Sanders.

“He also is doing exactly what he criticized President Obama for doing. He said President Obama is the founder of ISIS,” Kilmeade pointed out. “He just refounded ISIS because they have 30,000 men there and they are already striking back with our would-be evacuation. The president is really on the griddle with this.”

As you’ll see, Sarah Sanders was NOT happy with Kilmeade, who rather abruptly ended the segment after she protested.

Sanders is suddenly outraged that anyone would dare say such a thing about the president. https://t.co/IoxaEhKvq7 pic.twitter.com/gFU5hL4KQV

Previous Perkins: All Anti-LGBT Discrimination Should Be Legal
Next Trump Decided To Leave Syria After Call With Turkey’s President, Did Not Consult Pentagon Or Any US Allies