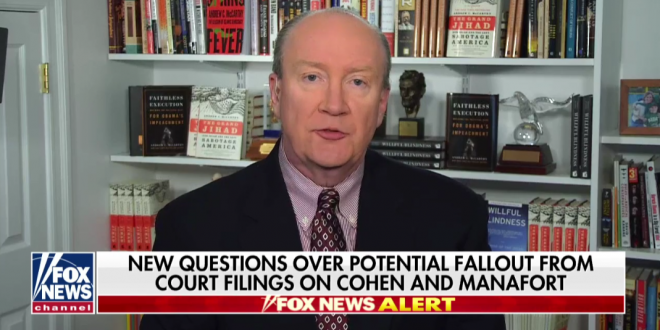 Fox Contributor: Trump Is “Very Likely To Be Indicted”

Former Assistant US Attorney Andrew McCarthy is getting a lot of attention for a column published today by Fox News:

The major takeaway from the 40-page sentencing memorandum filed by federal prosecutors Friday for Michael Cohen, President Trump’s former personal attorney, is this: The president is very likely to be indicted on a charge of violating federal campaign finance laws.

It has been obvious for some time that President Trump is the principal subject of the investigation still being conducted by the U.S. attorney for the Southern District of New York. Cohen earlier pleaded guilty to multiple counts of business and tax fraud, violating campaign finance law, and making false statements to Congress regarding unsuccessful efforts to build a Trump Tower in Moscow.

But when Cohen pleaded guilty in August, prosecutors induced him to make an extraordinary statement in open court: the payments to the women were made “in coordination with and at the direction of” the candidate for federal office – Donald Trump.

I have a column on @FoxNews this morning on why I think @POTUS will be indicted for campaign finance offenses by SDNY. Will be talking about it on @foxandfriends in a few min … https://t.co/fWzQxYuG5O

From the first, Mueller witch-hunt has been nothing less than Persecution and legal harassment of the President: Andrew McCarthy on Why Trump is likely to be indicted by Manhattan US Attorney. #MAGA #AmericaFirst #Dobbshttps://t.co/RqXXZMo9mj

“Notably: prosecutors have given Pecker and another American Media executive, Dylan Howard, immunity from prosecution. Do you think prosecutors did that to tighten up the case against Cohen? I don’t.” https://t.co/RlpB6mO9Bn

Previous Hair Furor Lashes Out At “Leakin’ James Comey”
Next Rubio Warns Trump: If You Pardon Manafort, You Will Trigger A Debate About Amending Pardoning Powers