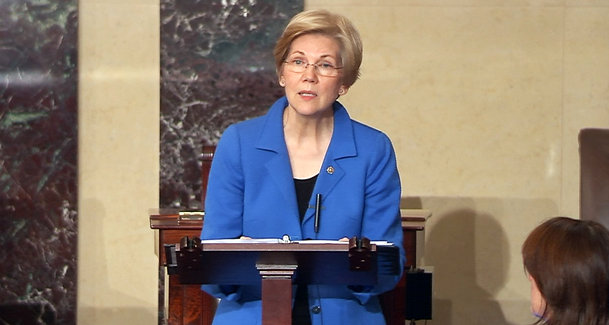 Sen. Elizabeth Warren jumped into the 2020 presidential campaign Monday, offering a message of economic populism as she became the best-known Democratic candidate yet to enter what is expected to be a crowded race.

Warren’s announcement that she was establishing an exploratory committee — the legal precursor to a run — came as other candidates, including several of her fellow senators, made final preparations for their own announcements, some of which are expected in days.

“America’s middle class is under attack,” the Massachusetts Democrat said in a four-minute, 30-second video emailed to supporters Monday. “How did we get here? Billionaires and big corporations decided they wanted more of the pie. And they enlisted politicians to cut them a bigger slice.”

Note all the gays in the clip.

Every person in America should be able to work hard, play by the same set of rules, & take care of themselves & the people they love. That’s what I’m fighting for, & that’s why I’m launching an exploratory committee for president. I need you with me: https://t.co/BNl2I1m8OX pic.twitter.com/uXXtp94EvY

Previous Trump Lashes Out At “Failed Generals” Over Syria/ISIS
Next Howard Dean: Trump Is “Mentally Incapacitated”