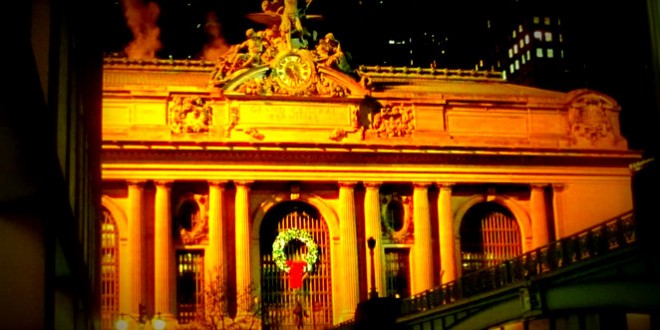 This story makes its fifteenth annual appearance on JMG…

The shorter woman is stout with a large firm chest. Her hair is short and brushed back into what might have once been called a ducktail. She has an ornate tattoo on her left forearm and she has a leather wallet protruding from the rear pocket of her jeans, attached to her leather belt by a short silver chain. She has more than a passing resemblance to Tony Danza, her big boobs notwithstanding, so naturally (in my head) I name her Toni.

Coach relents and she and Toni begin a beautiful, slow waltz, moving in half-time to the music. As you might have guessed already, Toni leads.

All around Coach and Toni, the tourists, the businessmen, the students, the conductors, even the guy with a broom – they’re all watching. Some are expressionless, but more are smiling, and some of them…some of them are frantically fussing with their cameras, eager to capture this magical New York Moment.

Serendipity prevails, the tune ends, and Toni dips Coach backwards with a dramatic up-sweep of her free arm as a firestorm of camera flashes erupt around them. Toni pulls Coach up and close to her and they hug. There’s another camera flash and the crowd begins to move along.