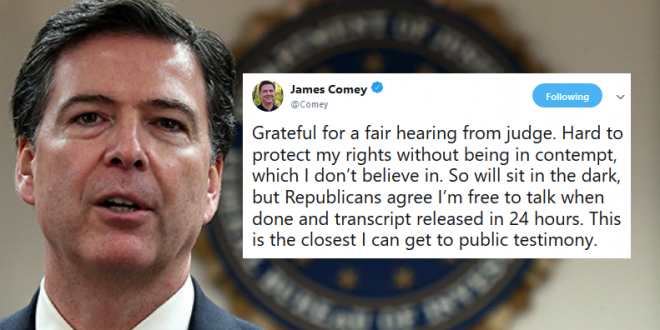 Former FBI Director James Comey tweeted Sunday that he had reached a deal to take part in a hearing with House Republicans behind closed doors but with the ability to release a transcript the next day, stating the deal was ” the closest I can get to public testimony.”

Comey had been subpoenaed by House Republicans to discuss Hillary Clinton’s use of a private email server as well as Russian interference in the 2016 election in a closed door setting, but he asked a federal judge to quash the subpoena while arguing that he preferred to take part in a public hearing.

Grateful for a fair hearing from judge. Hard to protect my rights without being in contempt, which I don’t believe in. So will sit in the dark, but Republicans agree I’m free to talk when done and transcript released in 24 hours. This is the closest I can get to public testimony.

Previous Adam Schiff: Cohen’s Guilty Plea Confirms That Trump And His Business Are “Compromised” By Russian Ties
Next Trump Claims He’ll Delay Shutdown Because Of GHWB