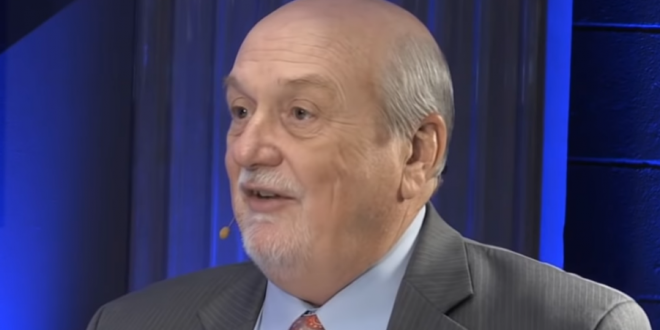 Christian TV CEO: Hillary Was Conceived As The Whore Of Babylon In Secret 1946 Scientology Ritual [VIDEO]

Today, SkyWatch TV posted a program in which End Times author and SkyWatch TV CEO Tom Horn suggested that Hillary Clinton is the “Whore of Babylon” who was conceived during a ritual carried out in 1946 by Scientology founder L. Ron Hubbard.

Horn claimed that stolen emails posted by Wikileaks revealed that Clinton had filled her 2016 presidential campaign with “occultists” who believe her to be the biblical Whore of Babylon who will usher in the Antichrist.

Citing a ritual that took place in 1946 called “The Babylon Working” in which Hubbard and others allegedly attempted to conceive a goddess through “ritual sex magic,” Horn claimed that Clinton may have been the result of that effort “to bring through, into our reality, the archetype divine feminine, the Whore of Babylon.”

As you’ll see in the clip, there’s also a bit of nutbag numerology regarding Hillary’s age in 2020. Ooga booga!