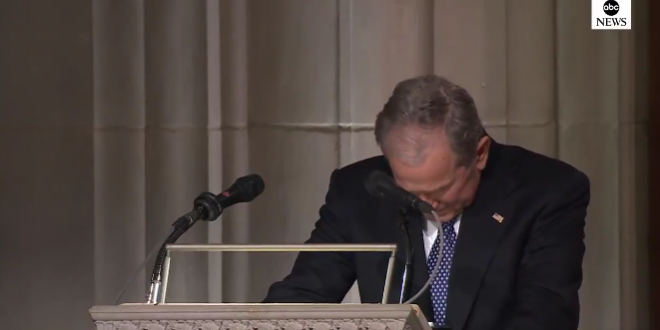 Bush 43 Breaks Down In Tears During Father’s Eulogy

George W. Bush, the 43rd president, gave a tearful eulogy of his father, peppered with jokes and personal stories. He said his father taught his children about the importance of public service and how to live a life with grace, humility and kindness.

“He was a genuinely optimistic man,” Bush said about his father. “And that optimism guided his children, and made each of us believe that anything was possible.”

He added, “To us, his was the brightest of a thousand points of light,” referring to the phrase popularized by his father when he accepted the presidential nomination at the 1988 Republican National Convention. Bush said that his father also showed him “what it means to be a president who leads with integrity.”

Many took that last bit as a jab at Trump.

At the very end of his eulogy for his father, George W. Bush broke down in tears. “We’re going to miss you…the best father a son or daughter could have. In our grief, let us smile knowing that dad is hugging Robin and holding mom’s hand again,” he said. pic.twitter.com/AKQIiCb1ve

Previous REPORT: Trump Shrugs Off Coming National Debt Crisis Because “I Won’t Be Here” When It Gets Really Bad
Next Volkswagen Moves Toward Ending Gas-Powered Cars