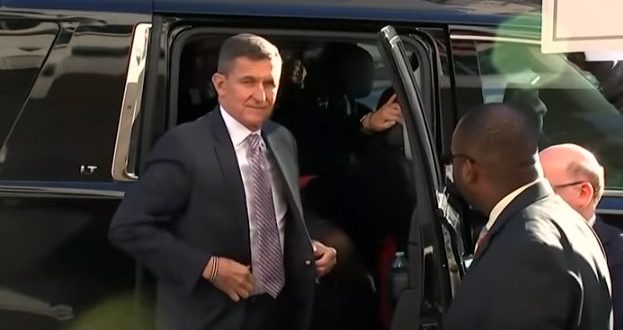 BREAKING: Court Delays Sentencing For Michael Flynn After Judge Tells Him “You Sold Your Country Out”

Moments ago lawyers for former Trump advisor Michael Flynn accepted a federal judge’s suggestion to delay sentencing after the judge appeared likely to disregard Mueller’s recommendation of no jail time. Flynn reportedly told the court this morning that he was indeed told that lying to the FBI is a crime. Updates to follow shortly….

UPDATE: From the New York Times.

At Mr. Flynn’s sentencing hearing in Federal District Court in Washington, Judge Emmet G. Sullivan called Mr. Flynn’s crimes “a very serious offense” and said he was not hiding his “disgust” at what Mr. Flynn had done.

“All along you were an unregistered agent of a foreign country while serving as the national security adviser,” the judge told Mr. Flynn. “Arguably that undermines everything that this flag over here stands for. Arguably you sold your country out.”

But Judge Sullivan gave Mr. Flynn the option of delaying the sentencing until he had completed his cooperation agreement with federal prosecutors. “I cannot assure that if you proceed today you will not receive a sentence of incarceration,” Judge Sullivan told Mr. Flynn.

“You were an unregistered agent of a foreign country while serving as the National Security Adviser to the president!

“Arguably, this undermines everything this flag over here stands for! Arguably, you sold your country out!”

Special counsel acknowledges Flynn’s role in the indictment of 2 Flynn associates related to their lobbying on behalf of Turkey.
If he hadn’t cooperated/admitted to lying about the Turkish lobbying, Flynn could have been charged in that case, Van Grack said.

Sullivan: “I’m not hiding my disgust, my disdain, for this criminal offense.”

Giving Flynn the chance to delay until he’s finished cooperating, Sullivan says he “can’t promise anything” about the sentence he’s about to hand down.

Judge Sullivan: “Exposure to Mr. Flynn would have been significant?” Gov: Yes.

So, at which point does Flynn escape from the courthouse, escorted by a SEAL platoon led by Bongo and Posobiec, then commence the arrest of the Clintons, the Obamas, and several dozen other prominent Democrats, stuffing them onto a C-17 headed to GTMO?#QAnon, I am confused….

This Flynn hearing is NOT going the way it was expected by either Mueller’s team or the defense. Judge Emmet Sullivan asked if Flynn committed treason.
“All along, you were an unregistered agent of a foreign country while serving as the National Security Adviser …” 1/2

Judge Sullivan asked, hypothetically, could Michael Flynn have been charged with treason.

Prosecutor Van Grack: “Because it’s such a serious question, I am hesitant from answering.” —@MSNBC

“It is true that this EDVA case is still pending and likely Flynn may testify in that case … For that reason, we are prepared to take your honor up on that suggestion.”

BREAKING / NBC News: The sentencing for Ret. Lt. Gen. Michael Flynn will be DELAYED. The defense says they will take the judge’s suggestion and delay the sentencing pending the EDVA case brought yesterday.