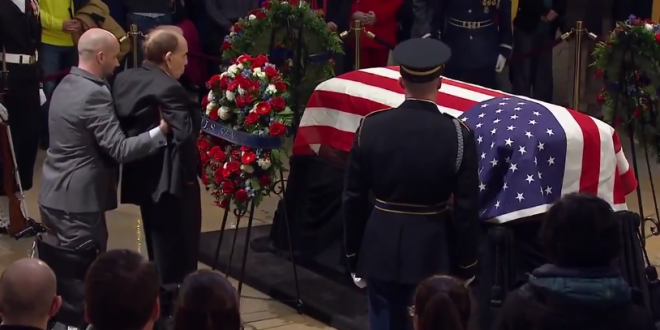 Bob Dole Helped Out Of Wheelchair To Salute GWHB

Former Sen. Bob Dole was helped out of his wheelchair Tuesday to salute former President George H.W. Bush as he laid in state at the Capitol Rotunda.

Dole, 95, once faced Bush during the 1988 Republican primary fight for the presidential nomination but nonetheless maintained a decades-old friendship with the former president.

On Saturday, he reflected on their relationship, telling CNN’s Ana Cabrera that his passing was an end of an era, as Bush was the last World War II veteran to serve as president.

Dole withdrew from the 1988 GOP nomination race after losing almost every state in that year’s Super Tuesday primary. Dole did win the GOP nomination in 1996, ultimately losing to Bill Clinton.

WATCH: Former Sen. Bob Dole is helped out of his wheelchair to salute the casket of George H.W. Bush in the U.S. Capitol. pic.twitter.com/BeIz3USrHr

Former Sen. Bob Dole stands up and salutes the casket of former President George H.W. Bush as he lies in state at the U.S. Capitol.

In a very emotional scene, former Senator Bob Dole was helped out of his wheelchair and saluted the casket of President Bush in the Capitol Rotunda moments ago.

Previous Lindsey Graham Tees Off After CIA Briefing On Saudis: It’s Not A Smoking Gun, It’s A Smoking Saw [VIDEO]
Next Christian TV CEO: Hillary Was Conceived As The Whore Of Babylon In Secret 1946 Scientology Ritual [VIDEO]