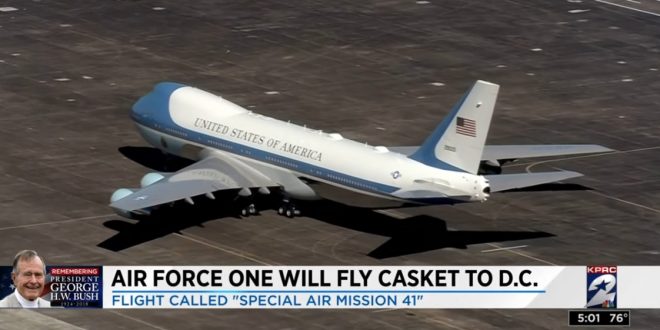 Air Force One Arrives To Transport Body Of GHWB

The late former president George H.W. Bush’s final flights on Air Force One will be called “Special Mission 41,” Bush’s spokesman said Sunday. By tradition, the plane is only called Air Force One when the president is on board. President Donald Trump will not be traveling on the aircraft, so the plane has been redesignated and renamed to honor Bush this week.

On Monday, Bush’s body will be transported to Washington, DC, where he will lie in state in the US Capitol rotunda until Wednesday morning, when there will be a memorial service at Washington National Cathedral.

The former president will be flown back to Houston later Wednesday on the same plane that brought the family to the nation’s capital for the final “Special Air Mission 41” flight.

After spending years sitting in waiting, President George H.W. Bush’s custom-painted train Bush 4141 will take him on a final ride. Painted to resemble Air Force One, Union Pacific railroad honored president Bush with Bush 4141 back in 2005.

Unlike other engines on the rails, Bush 4141 is the only one to have ever been driven by its namesake and a former U.S. President. Now, the locomotive has been called to duty to transport President Bush from Houston to his final resting place at the George H.W. Bush Presidential Library behind the Texas A&M campus next week.

Air Force One has arrived in Houston for what will technically be called “Special Air Mission 41” tomorrow and Wednesday. A beautiful day In Texas — “ceiling and visibility unlimited,” Mr. President. #Remembering41 #CAVU pic.twitter.com/F1xWzDxd04