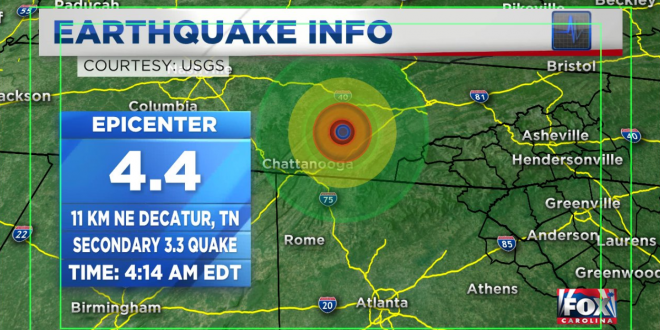 Residents in Tennessee and Georgia got a big surprise Wednesday morning: the rumblings of an earthquake. A magnitude 4.4 earthquake was recorded by the U.S. Geological Survey at around 4:14 a.m. ET, with its epicenter near Decatur, Tenn., which is roughly more than 150 miles from Nashville.

An aftershock was felt about 13 minutes later with a magnitude of 3.3, said the USGS. According to Atlanta TV station WXIA, the earthquake was felt as far as northern Georgia.

Confused residents in the region took to social media, including Twitter, to confirm the earthquake. The hashtag #earthquake is among the top trending searches on Twitter as of Wednesday morning.

This morning’s M4.4 earthquake near Decatur is the second strongest on record in East TN, according to the USGS. The strongest was a M4.7 near Maryville in 1973. #earthquake