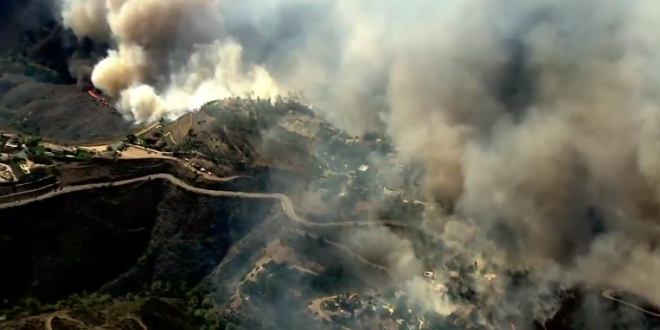 Residents of the city of Malibu, Calif. are under mandatory evacuation orders Friday as the Woolsley Fire heads for populated areas along the Pacific Coast Highway (aka U.S. Route 101) and the Pacific Ocean.

The Woolsey Fire jumped the 101 freeway early Friday as one of three massive wildfires that ignited in the Golden State in just the past two days. The Woolsey Fire broke out inland in the city of Simi Valley on Thursday and remains 0% contained.

As firefighters work to control the blaze, the best and really only thing residents can do is get out of the way. At least 75,000 homes have been evacuated in Los Angeles and Ventura Counties so far, according to CBS Los Angeles.

Caitlyn Jenner‘s home that was featured on her reality show, I Am Cait, reportedly burned down on Nov. 9. Her iconic property was in the path of the blazing Woolsey fire and was destroyed as Southern California’s wildfires continue to rage on.

Caitlyn’s 3,500 square foot home sat on top of a ridge and overlooked the Malibu beach area. She’s been there since 2015, and luckily she was able to get out in time.

All of the Malibu residents are currently under mandatory evacuation, as the fire’s burned more than 14,000 acres. Kim Kardashian, Khloé Kardashian, and Kourtney Kardashian also had to evacuate their homes.

Fire is burning out of control, heading into populated areas of Malibu. All residents evacuate now https://t.co/Q3wJnger2Q

Fire is not far away. I’m afraid
… Kinda numb. So Many homes lost mine is just one home.
I’d rather work on something
Positive Like 🌲🎅🏼Swag😥

I’m worried about my house🔥, but there is nothing I can do.
Friends houses have burned🙏🏻
I can’t bear the thought of there being no Malibu I’ve had a house in Malibu since 1972😭

“Fire is burning out of control, heading into populated areas of Malibu,” officials in the Southern California coastal city tweeted Friday afternoon, as the #WoolseyFire approached; on Pacific Coast Highway, residents piled in southbound cars to evacuate https://t.co/M3JzL4zxVj pic.twitter.com/G4lBYjnLbc

The #WoolseyFire jumped the 101 last night and is headed for the coast. Evacuation orders for #Malibu and you can see the fire moving closer to the beach on our County Line cam (https://t.co/lNUiiDr5h1). More details on coastal impacts coming soon. pic.twitter.com/FrDkdBP5Vv

Timelapse from Marina del Rey of the smoke billowing from the Malibu and Calabasas fires #KTLA pic.twitter.com/nvhniOKn9r