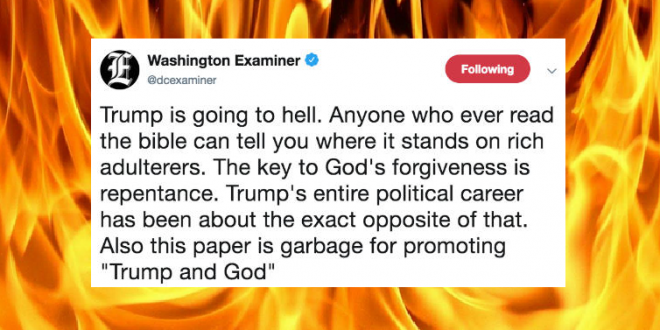 The Washington Examiner, a conservative American political journalism website and weekly magazine, has tweeted out a scathing post on President Donald Trump declaring that the president is “going to hell,” before hitting out at the paper itself for promoting him.

“Trump is going to hell,” the tweet, posted on Monday just after 1a.m. ET reads. “Anyone who ever read the bible can tell you where it stands on rich adulterers.”

The tweet has been deleted but at this writing there’s been no explanation from the Examiner.

Happy Monday morning to the editors at the Washington Examiner! pic.twitter.com/AzVLIgI7nL

UPDATE: They’re claiming to have been hacked.

The Washington Examiner’s Twitter feed was hacked and a tweet was posted that did not come from our staff. We are taking appropriate action and will issue a further statement if necessary.

Previous “I’m White And I’m Hot” Woman Surrenders To Cops
Next FLORIDA: Gillum And Nelson Both +4 In Final Poll