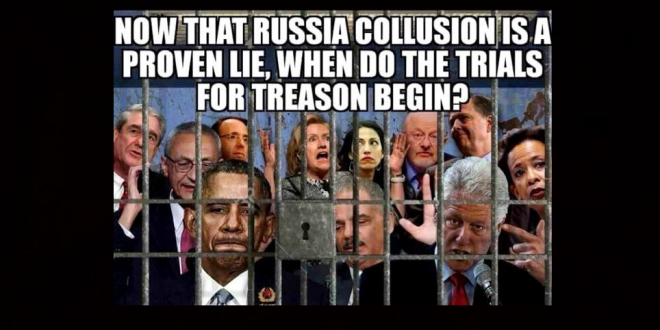 Donald Trump has stepped up his attacks on the Mueller investigation by sharing an image of figures such as Barack Obama, the Clintons, and special counsel Robert Mueller himself behind bars for “treason.” The image, posted by a Trump fan page called the Trump Train, was retweeted by the president Wednesday morning. It’s captioned “Now that Russia collusion is a proven lie, when to the trials for treason begin?”

While the disgusting Fake News is doing everything within their power not to report it that way, at least 3 major players are intimating that the Angry Mueller Gang of Dems is viciously telling witnesses to lie about facts & they will get relief. This is our Joseph McCarthy Era!

Illegals can get up to $3,874 a month under Federal Assistance program. Our social security checks are on average $1200 a month.

RT if you agree: If you weren’t born in the United States, you should receive $0 assistance.

If GM doesn’t want to keep their jobs in the United States, they should pay back the $11.2 billion bailout that was funded by the American taxpayer.