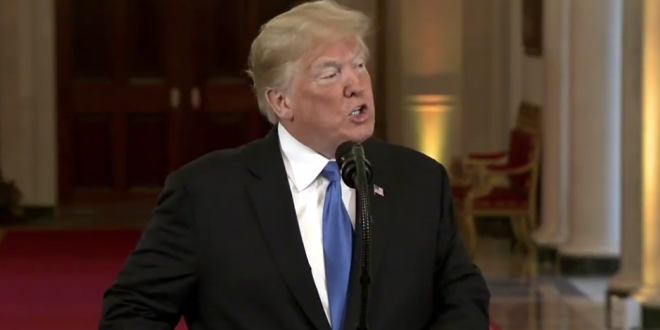 Trump Threatens Violence Against Antifa: “The Police, The Military, They’re Very Tough And Getting Angrier”

More from his interview with the Daily Caller:

President Donald Trump warned violent leftists and Antifa members that an opposition to them may “mobilize,” and it would mean “big trouble” for the leftist group. “They better hope that the opposition to Antifa decides not to mobilize,” the president told The Daily Caller in an exclusive Oval Office interview Wednesday.

“These people, like the Antifa — they better hope that the opposition to Antifa decides not to mobilize. Because if they do, they’re much tougher. Much stronger. Potentially much more violent. And Antifa’s going to be in big trouble. But so far they haven’t done that and that’s a good thing,” he continued.

“[Antifa] better hope that the other side doesn’t mobilize,” Trump concluded, “Because if you look, the other side, it’s the military. It’s the police. It’s a lot of very strong, a lot of very tough people. Tougher than them. And smarter for them. They’re sitting back and watching and they’re getting angrier and angrier.”

Trump said nothing about the Proud Boys. Of course.