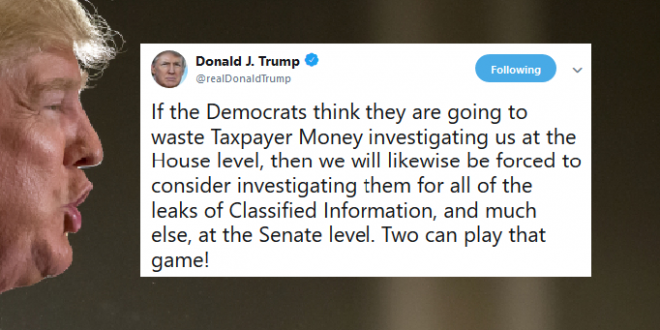 President Donald Trump will soon be on the receiving end of something he didn’t see much from a Republican-led Congress: orders, backed up by subpoenas, for officials to answer questions on controversial policies like the dispatch of thousands of troops to the U.S.-Mexico border. “Two can play that game!” Trump wrote Wednesday on Twitter.

Now that Democrats have won control of the U.S. House of Representatives, they will be able to force administration officials to testify and provide documents.

That will subject Trump’s decision-making — as well as his personal finances and potential conflicts of interest — to deeper public and private examination by key committees, as the national focus shifts to the 2020 presidential election.

If the Democrats think they are going to waste Taxpayer Money investigating us at the House level, then we will likewise be forced to consider investigating them for all of the leaks of Classified Information, and much else, at the Senate level. Two can play that game!

To any of the pundits or talking heads that do not give us proper credit for this great Midterm Election, just remember two words – FAKE NEWS!

In all fairness, Nancy Pelosi deserves to be chosen Speaker of the House by the Democrats. If they give her a hard time, perhaps we will add some Republican votes. She has earned this great honor!