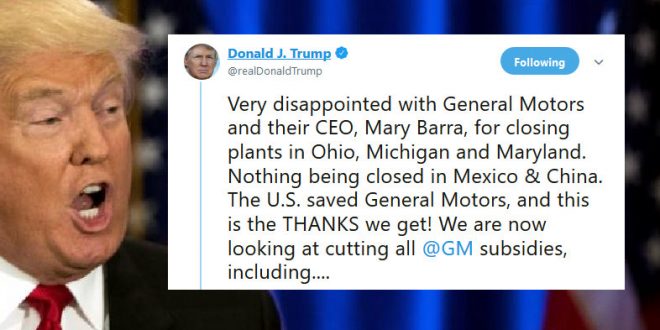 Trump Threatens To Cut “All GM Subsidies” Over Layoffs

President Donald Trump will consider cutting all subsidies to General Motors after the company announced plans to slash productions at several American plants, he said Tuesday. The automaker’s shares fell following the tweet and were down more than 2 percent on Tuesday afternoon.

The tweet escalates the president’s public threats against GM as he pushes the company to keep the facilities in Ohio, Michigan and Maryland open. Trump has repeatedly pressured American companies who consider moving operations overseas after he pledged to revive U.S. manufacturing.

Very disappointed with General Motors and their CEO, Mary Barra, for closing plants in Ohio, Michigan and Maryland. Nothing being closed in Mexico & China. The U.S. saved General Motors, and this is the THANKS we get! We are now looking at cutting all @GM subsidies, including….

….for electric cars. General Motors made a big China bet years ago when they built plants there (and in Mexico) – don’t think that bet is going to pay off. I am here to protect America’s Workers!