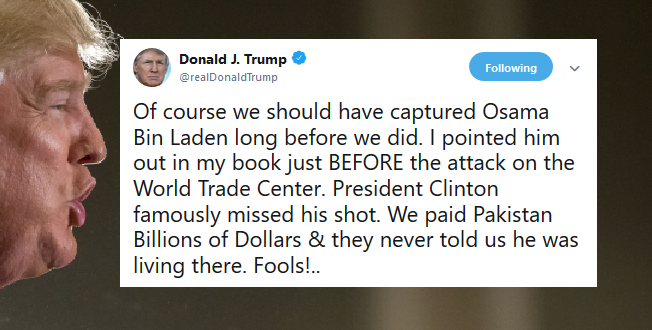 President Trump spoke to Chris Wallace of Fox News on Sunday and made a number of false claims about the operation that killed Osama bin Laden. Wallace mentioned the commander of that operation, retired Admiral Bill McRaven, who has publicly criticized Trump for his denigration of the media.

Trump responded that McRaven is a “Hilary Clinton backer and an Obama-backer.” In fact, McRaven took no position on the 2016 presidential election in which Clinton ran against Trump. In Sunday’s interview, Trump went on to claim that bin Laden was “living in Pakistan right next to the military academy, everybody in Pakistan knew he was there.”

This is complete nonsense. When I was researching a book about the hunt for bin Laden, I spoke to dozens of key government, intelligence and military officials involved in the bin Laden operation and they all said that the Pakistanis had no clue that al Qaeda’s leader was living in the city of Abbottabad, Pakistan where he was found.

The entire brouhaha with McRaven and bin Laden was sparked when Wallace asked Trump to defend his attacks on the media. In doing so, Wallace brought up McRaven, who has said that Trump’s attacks on the free press were “the greatest threat to democracy.”

Of course we should have captured Osama Bin Laden long before we did. I pointed him out in my book just BEFORE the attack on the World Trade Center. President Clinton famously missed his shot. We paid Pakistan Billions of Dollars & they never told us he was living there. Fools!..

….We no longer pay Pakistan the $Billions because they would take our money and do nothing for us, Bin Laden being a prime example, Afghanistan being another. They were just one of many countries that take from the United States without giving anything in return. That’s ENDING!

This is literally the only reference to ObL in the entire book.

“One day we’re told that a shadowy figure with no fixed address named Osama bin-Laden is public enemy number one”https://t.co/pozYcNu7qJ

Adm. McRaven responds: “I admire all presidents, regardless of their political party, who uphold the dignity of the office … I stand by my comment that the President’s attack on the media is the greatest threat to our democracy in my lifetime.” https://t.co/VRvAEaA0l1

To veterans who supported @realDonaldTrump,

Previous Conway: Trump Isn’t Afraid To Sit Down With Mueller
Next Bloomberg Donates Record $1.8B To Johns Hopkins