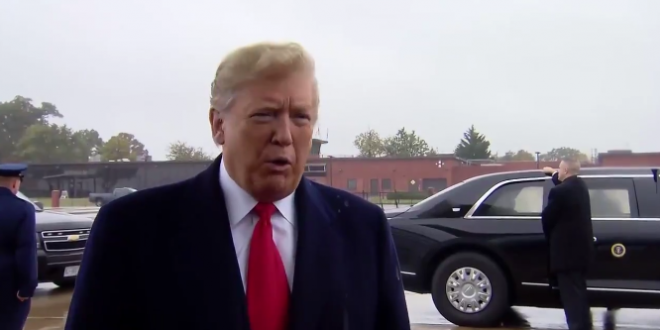 Hair Furor Rages: Michael Cohen Is A “Not Very Smart Weak Person” Who Is Lying To Get A Reduced Sentence

“There would have been nothing wrong if I did do it,” Trump said Thursday of the Trump Tower Moscow project.

Trump has repeatedly denied having any financial ties to Russia during his 2016 campaign, and has vehemently dismissed the suggestion that there was any collusion between his campaign and the Kremlin.

In reference to Michael Cohen's guilty plea, Pres Trump said he decided against the Russia project, but there would have been nothing wrong if he did pursue it while running for president. He called Cohen "a weak person" and said he was "lying to get a reduced sentence." pic.twitter.com/FWx9CkSAeF

Pres Trump calls Michael Cohen a "liar," a "weak person" and "not a very smart person"

But when asked why Cohen worked for him for so long…the President says:

Trump on Cohen: "By being weak, unlike other people that you watch, he's a weak person, and what he's trying to do is get a reduced sentence."

"Unlike other people that you watch…"

TRUMP, speaking to reporters outside the White House, says Michael Cohen is "a weak person. And by being weak, unlike other people that you watch, he's a weak person, and what he's trying to do is get a reduced sentence. So he is lying about a project everybody knew about." pic.twitter.com/QVSGJcoRa6

Previous Trump Lies About Nonexistent Deal For New BMW Plant
Next Fox News Legal Analyst: Cohen’s Plea Is The Tip Of The Iceberg, The Rest Of The Iceberg Is In Mueller’s Office