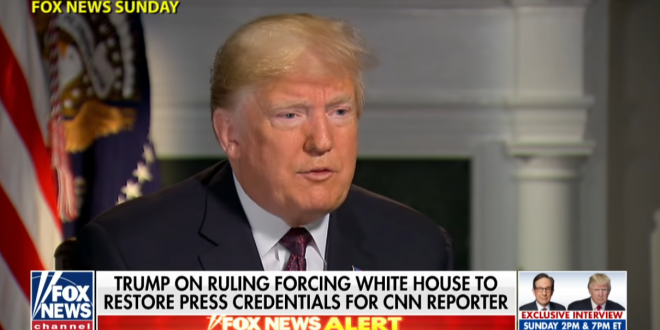 Trump On CNN’s Acosta: If He “Misbehaves” Again We’ll Stop The News Conference Or Throw Him Out [VIDEO]

President Trump isn’t finished with CNN’s Jim Acosta. Trump, in an interview with Fox News Channel’s Chris Wallace to air on Sunday, reacted to a judge’s ruling Friday forcing the White House to reinstate Acosta’s press credentials, which had been revoked at Trump’s direction. “Yeah, it’s fine I mean it’s not a big deal,” Trump said of the ruling. “What they said though is that we have to create rules and regulations for conduct. If he misbehaves we’ll throw him out or we’ll stop the news conference.”