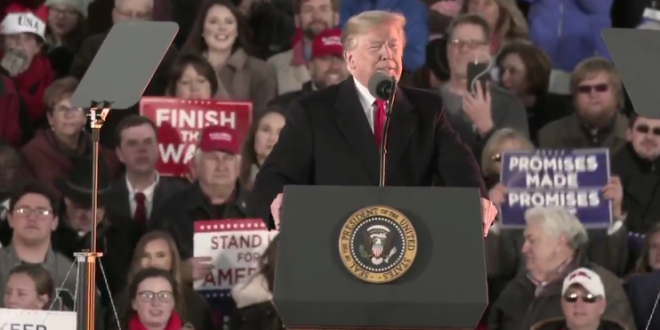 Trump: I Looked Like Elvis When I Was Young [VIDEO]

“Tupelo, home of thousands of hard-working American patriots, and the proud birthplace of the king of rock n’ roll, Elvis. Elvis! We love Elvis. I shouldn’t say this, you’ll say I’m very conceited because I’m not, but other than the blonde hair, when I was growing up they said I looked like Elvis. Can you believe it? I always considered that a great compliment.” – Donald Trump, speaking last night at a rally for Sen. Cindy Hyde-Smith.

Pres. Trump, in Tupelo, MS, the birthplace of Elvis Presley: “Other than the blonde hair, when I was growing up they said I looked like Elvis…I always considered that a great compliment.” https://t.co/NkJuIoh4fP pic.twitter.com/uBAzhWwA9G

Elvis Presley was drafted at the height of his career and served 2 years in the Army. Donald Trump received 5 deferments and still hasn’t visited our troops in a combat zone. Yeah, they’re exactly the same person. https://t.co/TNozXX8ZB8

A photo of Elvis arriving at McGuire Air Force base in New Jersey on March 3, 1960, two days before he was officially discharged from the Army.

GI Joke Trump 1964 after being expelled & shipped off to boarding school pic.twitter.com/mvkNMSS8eV