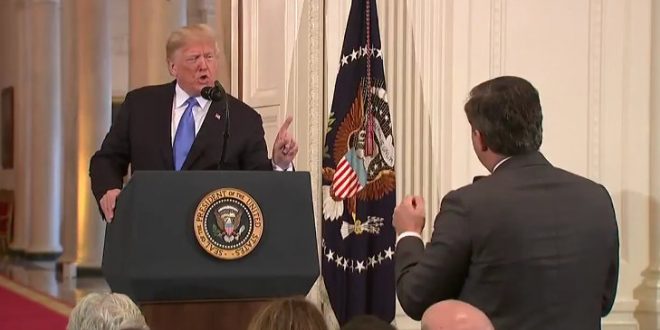 Trump Explodes At Jim Acosta: You Are Rude Terrible Person And Shouldn’t Be Working For CNN [VIDEO]

Trump refused to answer a follow-up question from CNN reporter Jim Acosta, who persisted in his attempt to ask the president about the Russia investigation. Trump spoke loudly over Acosta and demanded he hand over the microphone. “That’s enough,” Trump said repeatedly as Acosta continued to try and ask his question.

Trump stepped away from the lectern for a moment before returning to the microphone. “I tell you what, CNN should be ashamed of itself having you working for them,” the president said, shaking a finger at Acosta. “You are a rude, terrible person.”

“You are a very rude person,” Trump continued. “The way you treat Sarah Huckabee is horrible,” he said, referring to the White House press secretary. When NBC’s Peter Alexander tried to stand up for his peer, Trump turned his ire on him as well. “I’m not a big fan of yours either, to be honest,” the President said.

So that was a Trump flack literally trying to wrestle the microphone out of Jim Acosta’s hands while he and Trump shouted at each other.

And now Trump shouts at April Ryan: “You sit down! Sit down! I didn’t call you!”

Trump really bringing the country together in this press conference

Donald Trump to @Acosta: “You are a rude terrible person.”

“You are the enemy of the people.”

We need to crowdfund a statue of Jim Acosta.

Trump wants to make the story him vs the media not him getting his ass kicked in the House. This press conference is playing right into that narrative.

This era of bipartisan good feeling is off to a tremendous start.

Asked if he expects investigations on everything from his tax returns to his cellphone use, Trump says, “If that happens, we’re going to do the same thing. And government comes to a halt. And I would blame them.”

can we talk about the layer of flesh around trump’s eyes that looks like a raccoon mask or are we going to pretend it isnt there?

I salute true journalists like @Acosta and @AprilDRyan who have NEVER backed down in the face of a White House that regularly bashes the free press and incites violence against reporters.

“You are a rude, terrible person. You shouldn’t be working for CNN,” Trump told CNN’s Jim Acosta during a press conference in which he repeatedly clashed with reporters. pic.twitter.com/OvWCcFap5g

President Trump tears into CNN’s Jim Acosta: “Honestly, I think you should let me run the country and you run CNN”

Previous LIVE VIDEO: Trump Holds Presser On Midterm Results
Next Matt Barber’s Website Has The Midterms Super Sadz: “Yesterday Was One Of The Darkest Days In US History”