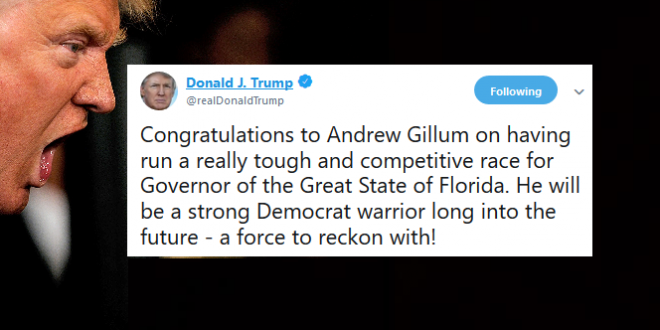 President Donald Trump congratulated Andrew Gillum in his race for Florida governor in a tweet Saturday, calling the Democrat a “force to be reckoned with.” The odd praise of a man Trump called a “thief” during the campaign comes after the president delivered other congratulations to failed Democratic candidates. In a tweet Friday night, Trump said Democrat Stacey Abrams, who ran for governor of Georgia, “fought brilliantly and hard – she will have a terrific political future!”

Congratulations to Andrew Gillum on having run a really tough and competitive race for Governor of the Great State of Florida. He will be a strong Democrat warrior long into the future – a force to reckon with!

In Florida there is a choice between a Harvard/Yale educated man named @RonDeSantisFL who has been a great Congressman and will be a great Governor – and a Dem who is a thief and who is Mayor of poorly run Tallahassee, said to be one of the most corrupt cities in the Country!