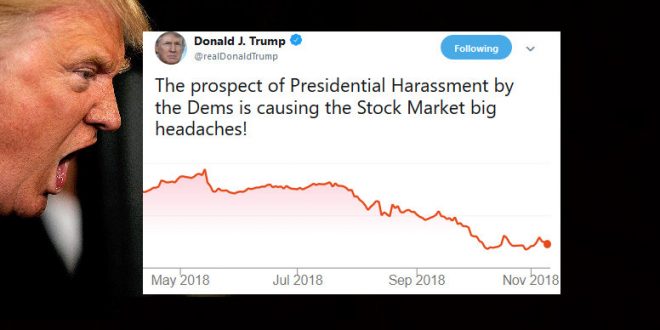 President Trump has repeatedly said there’s been no collusion between his campaign and Russia. So far, Mueller’s probe has led to the indictments of more than 30 people including mostly Russian nationals, but also former Trump campaign manager Paul Manafort and former National Security Adviser Michael Flynn.

Trump, however, appears ready to point to any potential problems he might face as a reason behind stock market weakness.

“Candidly, trying to pin this on the election and what might happen to the market is fraught with peril and lacking logic. Trying to say the pesky Democrats are going to try to point out malfeasance by the administration – everyone knows this only goes so far,” said Art Hogan, chief market strategist at B.Riley FBR.

The prospect of Presidential Harassment by the Dems is causing the Stock Market big headaches!

“Presidential harassment” is the phrase McConnell coined last week at his press conference talking about House Democratic investigations. And now Trump blames the stock market on investigations that haven’t even started? https://t.co/9Y2hIi3Itx