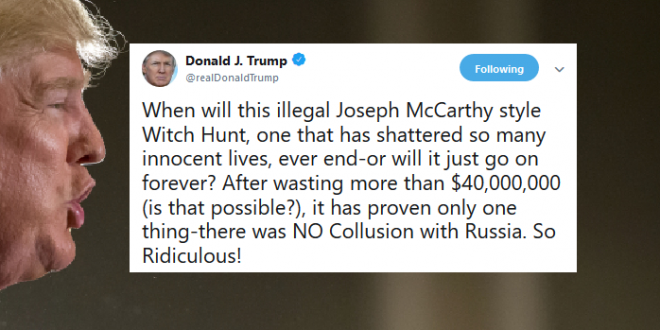 Either Robert Mueller managed to spend $10 million in less than 48 hours, or Donald Trump is unable to keep track of himself as he continues to slam the special counsel.

The president got on his phone on Thursday to rip Mueller for the kabillionth time over the ongoing investigation into Russia.

As he compared the probe to the Joe McCarthy era Red Scare once again, Trump proclaimed that the probe has supposedly cost more than $40 million. Just two days ago, he said the probe cost $10 million less than that.

PolitiFact, a Pulitzer Prize-winning independent fact-checking organization, found that the special counsel’s office was allocated $10.4 million in fiscal 2018 and is set to have the same amount to spend in the current fiscal year, which began Oct. 1.

The organization also noticed a footnote in the Justice Department documents that show the Mueller office also “incurred $3.5 million in indirect costs.” That would bring the total to $20.2 million. The special counsel’s office has taken on new costs since May, but it has yet to disclose those figures.

And of course, Hair Furor is ignoring the simple fact that assets seized from Paul Manafort will likely more than pay for Mueller’s operation.

When will this illegal Joseph McCarthy style Witch Hunt, one that has shattered so many innocent lives, ever end-or will it just go on forever? After wasting more than $40,000,000 (is that possible?), it has proven only one thing-there was NO Collusion with Russia. So Ridiculous!

….terrible Gang of Angry Democrats. Look at their past, and look where they come from. The now $30,000,000 Witch Hunt continues and they’ve got nothing but ruined lives. Where is the Server? Let these terrible people go back to the Clinton Foundation and “Justice” Department!