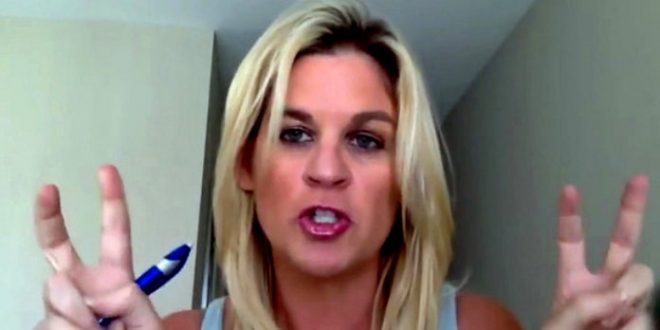 “This man [actor Rainn Wilson], I started doing some research on him. Guess what? He’s involved with a charity in Haiti. Any celebrity that is involved with ‘work’ in Haiti, you had better believe they’re involved in child sex trafficking, okay? So the guy who openly talks about cannibalism, eating babies, and raping babies and who just happens to be involved in a charity that allegedly helps kids in Haiti; now Rainn, ironically—not ironically—guess what?

“His house is one of the houses that was burned down the other day. Guess what? A lot of people who are up to their eyeballs in child sex trafficking have had their homes burn down. Burning evidence much? I don’t think it’s a coincidence. The more people they kill, the better because it’s more sacrifice to Moloch.” – Townhall columnist Liz Crokin, whose YouTube channel has millions of views.

PREVIOUSLY ON JMG: Crokin claims California mudslides were God’s punishment to Oprah for being anti-Trump. Crokin claims that all of Trump’s “loudest critics” are involved in pedophilia and that one-third of all elected officials are “Satanic cannibals” who “drink the blood of children.” Crokin declares that she knows Jesus Christ is real because demons gave her dog bloody diarrhea. Arguably the most prolific QAnon nutbag, Crokin claims Trump is regularly posting secret messages on 4chan to give hints about the imminent arrests of thousands of Hollywood and deep state pedophiles. Crokin made national headlines early this year when she accused model Chrissy Teigen and her husband, pop star John Legend, of being involved in pedophilia.