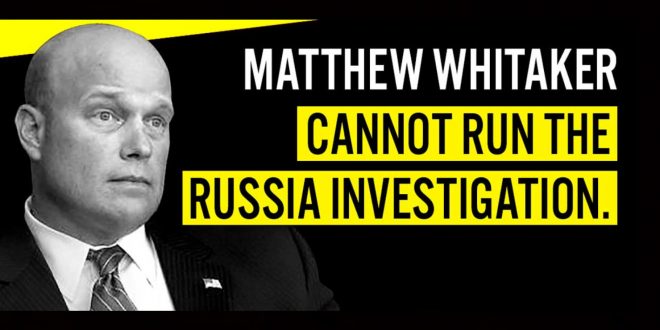 Via press release from MoveOn:

Whitaker has publicly outlined strategies to stifle the investigation and cannot be allowed to remain in charge of it. The Nobody Is Above the Law network demands that Whitaker immediately commit not to assume supervision of the investigation. Our hundreds of response events are being launched to demonstrate the public demand for action to correct this injustice. We will update this page as the situation develops.

Donald Trump just crossed a red line, violating the independence of the investigation pursuing criminal charges in the Trump-Russia scandal and cover-up. Trump putting himself above the law is a threat to our democracy, and we’ve got to get Congress to stop him. We’re mobilizing immediately to demand accountability, because Trump is not above the law.

Please make note of the date, time, and description below to confirm that the host is able to organize the event on such short notice! In general, rallies are suggested to begin @ 5 PM local time. But individual local events may vary—please confirm details on your event page.

#TrumpIsNotAboveTheLaw. Trump has crossed a red line – and we’re mobilizing. In January, our newly elected MoCs should launch investigations & hearings on day one. And tomorrow at 5 PM (local time), we march in the streets. Find an event near you: https://t.co/vcNlC5T8oe

Sign up now to find a protest near you: https://t.co/RAfE4MYSz4 pic.twitter.com/NEY5spFyRB

BREAKING: Grassroots activists around the country are gathering for rapid-response protests THURSDAY, default 5pm local time (but check event posts for local details), given news of #Sessions‘s firing. This is a red line crossed, an attack on rule of law. https://t.co/Lh9J0PfEiC

There are over 900 protests planned for tomorrow in light of the firing of Jeff Sessions and this kangaroo loyalist AG appointment Trump made. Find one near you. Help #ProtectMueller https://t.co/Gi0vCwOUMW