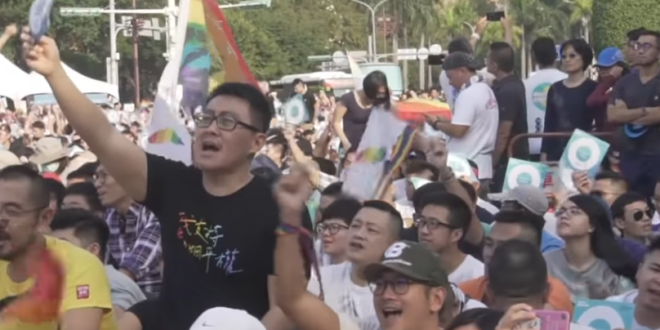 TAIWAN: 100,000 Rally Ahead Of Marriage Referendum

More than 100,000 people, including musicians, filmmakers and politicians, yesterday rallied on Ketagalan Boulevard in Taipei to show support for same-sex marriage ahead of Saturday’s referendums on the issue. “In this last week leading up to the referendums, we hope to encourage more people to vote yes on referendums No. 14 and 15, and to vote no in Nos. 10, 11 and 12,” the Gender Equality Education Coalition, which organized the event, said in a statement.

The Council of Grand Justices on May 24 last year ruled that a provision in the Civil Code that defines marriage as between a man and a woman was unconstitutional. It asked the legislature to legalize same-sex marriage within two years. Conservative groups proposed a referendum to keep the current definition of marriage in the Civil Code and another referendum to require that the rights of same-sex couples living together be protected by laws other than the Civil Code, citing the need to protect traditional family values.

The Happiness of the Next Generation Alliance and other conservative groups, whose advertisements have been seen on buses and on front pages of major newspapers, reportedly have an advertising budget of more than NT$100 million (US$3.24 million), while the [pro-LGBT] coalition has so far raised just over NT$8 million.

The anti-LGBT measures were forced onto the ballot with the aid of Brian Brown’s National Organization for Marriage. Brown’s video is the second one below.

Ahead of crucial vote, thousands rally in support of equal marriage in Taiwanhttps://t.co/r5xF2Bb9w9 pic.twitter.com/36FuYDu7cX