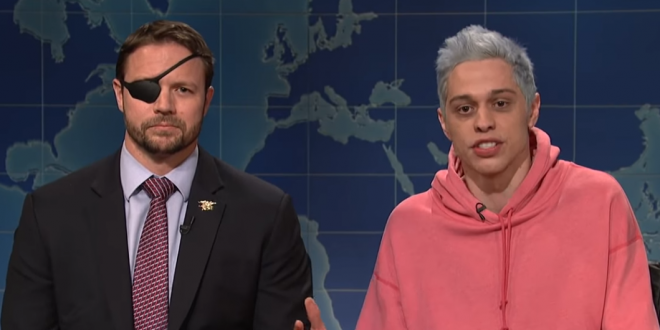 Pete Davidson admitted during the Saturday, November 10, episode of Saturday Night Live to making a poor choice the week prior and he made amends. Davidson apologized to Lieutenant Commander Dan Crenshaw after he made a controversial joke about the congressman-elect’s eye patch during the November 3 episode of SNL.

“The man is a war hero and he deserves all the respect in the world,” the comedian said before being joined at the “Weekend Update” desk by Crenshaw. The veteran then trolled Davidson by letting his Ariana Grande ringtone play, something the singer’s ex-fiancé seemed genuinely surprised to witness.

“But seriously, there’s a lot of lessons to learn here,” Crenshaw said. “Not just that the left and the right can still agree on some things, but also this: Americans can forgive one another. We can remember what brings us together as a country and still see the good in each other.

“This is Veterans Day weekend, which means that it’s a good time for every American to connect with a veteran. And never forget those we lost on 9/11, heroes like Pete’s father,” he added, paying tribute to Davidson’s father, who died in the September 11th attacks. “So I’ll just say, Pete, never forget.”