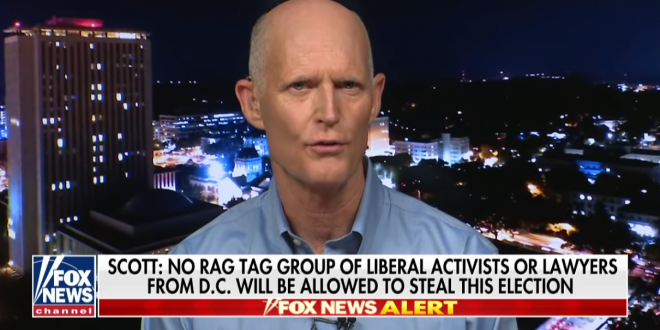 Looming recounts in top Florida election contests, including the bitterly fought races for Senate and governor, erupted late Thursday into a fiery feud as Gov. Rick Scott, the Republican nominee for Senate who claimed victory on Tuesday, sued local elections officials in two of the state’s largest counties and accused them of “rampant fraud.”

Standing on the steps of the Governor’s Mansion, Mr. Scott announced on Thursday night that his Senate campaign had sued the Democratic elections supervisors of Broward and Palm Beach Counties. He then asked the Florida Department of Law Enforcement, which he helps oversee as governor, to investigate them.

“Every day since the election the left-wing activists in Broward County have been coming up with more and more ballots out of nowhere,” Scott told reporters.

The tight Senate race was too close to call on Tuesday night, but as more votes were processed, Scott’s lead fell below .5 percent, which could trigger an automatic machine recount. It is currently .2 percent — fewer than 22,000 votes, according to NBC News. A final vote count is expected by noon on Saturday.

“I will not sit idly by while unethical liberals try and steal this election from the great people of Florida,” Scott told reporters Thursday.

Law Enforcement is looking into another big corruption scandal having to do with Election Fraud in #Broward and Palm Beach. Florida voted for Rick Scott!

This is all made up.

Republicans, this is decision time – if you use your political power in Florida to shut down this vote, just so your guy can win, then it’s over. Democracy is officially dying. https://t.co/cKvGPat4S7

Republicans going hard on Florida because it worked once before and got them an entire presidency!

Rick Scott announcing lawsuits to stop the votes from being counted. We’ve seen this movie before, folks.

This video,posted by an Independent Cong candidate in 18 (who was endorsed by Bernie Sanders in 16) purports to show BrowardCounty ballots being transported from polling places in private cars.

Has anyone in local media looked into this claim or asked elections dept about it? https://t.co/1JztfdRudn

As senator, don’t you think you’d have better avenues to find the answer here rather than sharing a video from someone who questined if Democrats murdered Seth Rich?https://t.co/gSoWLshnMu