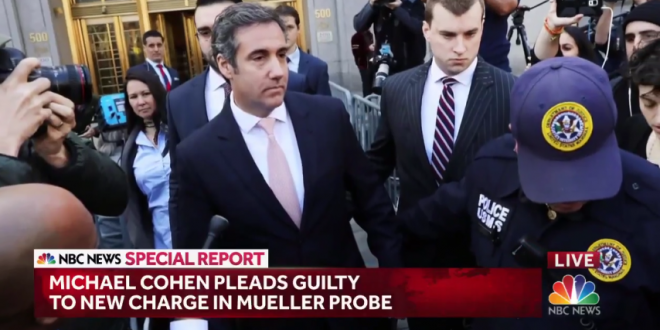 REVEALED: Cohen Lied About Trump Tower Moscow Project, Which Was Still Under Consideration In 2017

The Associated Press reports that the false statements relate to a Trump real estate project in Russia — specifically, efforts to build a “Trump Tower Moscow.” Stephanopoulos also claims, per his sources, that Cohen will provide “dozens of hours of testimony potentially damaging to” President Trump.

Cohen had already pleaded guilty to tax fraud, bank fraud, and campaign finance charges as part of an investigation run by the US Attorney’s Office for the Southern District of New York. But he had not previously been charged as part of the Russia probe or officially agreed to cooperate with that investigation.

Michael Cohen leaves federal courthouse without saying anything to reporters, but his attorney says he “has cooperated and will continue to cooperate.” pic.twitter.com/X481zLNJn5

BREAKING: Michael Cohen names the president in court involving Moscow project, and discussions that he alleges continued into 2017. @Tom_Winter explains after attending the court hearing this morning. https://t.co/6VteqRXgoD pic.twitter.com/iw9Mld32KV

From the court docs, per CNN: The Trump Tower Moscow negotiations went on through June 2016. The deal was discussed more than 3 times with Trump. Cohen briefed Trump’s family members within the org & took steps in contemplation of Trump’s possible travel to Russia in 2016.

When, in Feb 2017, we broke news of the Cohen/Sater Trump Tower Moscow effort, Cohen and Sater told me the effort had ended in the fall of 2015. In his first comment on the project, Cohen told me Trump Org had determined that the project was not feasible. https://t.co/nD0VXgeYXq

Michael Cohen also said Trump knew about the Trump Tower Russia meeting before it happened. Trump denied that in his written answers. https://t.co/jkIAg9hmpx

Michael Cohen has pleaded guilty to lying to Congress about a Trump real estate project in Russia (via @AP) — Here's what you need to know about him pic.twitter.com/ltWGJPudlT