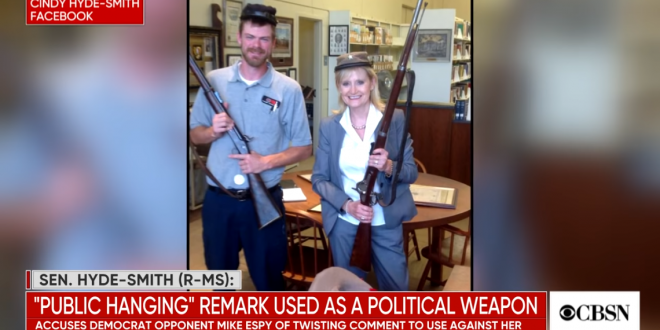 U.S. Sen. Cindy Hyde-Smith attended and graduated from a segregation academy that were set up so that white parents could avoid having to send their children to schools with black students, a yearbook reveals. A group photo in the 1975 edition of The Rebel — the Lawrence County Academy Yearbook — illustrates the point.

High-school cheerleaders smile at the camera as they lie on the ground in front of their pom-poms, fists supporting their heads. In the center, the mascot, dressed in what appears to be an outfit designed to mimic that of a Confederate general, offers a salute as she holds up a large Confederate flag.

The photo, and the recently appointed Republican senator’s attendance at one of the many private schools that was set up to bypass integration, adds historic context to comments she made in recent weeks about a “public hanging” that drew condemnations from across the political spectrum.

It appears that Hyde-Smith was attending school somewhere else when the Lawrence Academy opened, meaning she transferred there deliberately. The above-linked article (read it in full) notes that her official bio “conspicuously” omits mention of her high school years.

We‘ve obtained photos from Cindy Hyde-Smith’s high school yearbook, revealing she attended a segregation academy set up so that white parents wouldn’t have to send their kids to school with black kids. The mascot even carried a Confederate flag. #MSSenhttps://t.co/tFspo5w1Mc

This whole story is worth a read. Beyond showing why good local journalism is still important, it lays out a pretty devastating case against Hyde-Smith. Maybe she couldn’t control that her family sent her to a segregation academy, but she sent her own daughter to the same school. https://t.co/vZXygeyP1Y