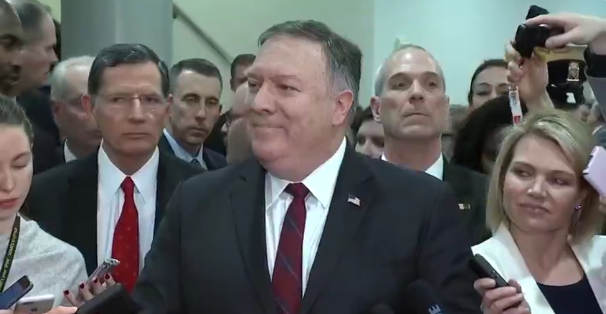 Pompeo Dismisses Saudi Prince’s Link To Murder: We Have “No Direct Reporting” Connecting Him [VIDEO]

The secretary of state, Mike Pompeo, has said that downgrading US ties with Saudi Arabia over the killing of journalist Jamal Khashoggi would be a mistake for national security and would not push Saudis in a better direction at home.

After repeated calls from members of Congress for a strong US response, Pompeo and the defense secretary, Jim Mattis, were briefing the US Senate behind closed doors about Saudi Arabia and the 2 October murder of Khashoggi at the Saudi consulate in Istanbul, as well as the civil war in Yemen.

“The October murder of Saudi national Jamal Khashoggi in Turkey has heightened the Capitol Hill caterwauling and media pile-on. But degrading US-Saudi ties would be a grave mistake for the national security of the US and its allies,” Pompeo wrote in the Wall Street Journal.

Pompeo claims there is “no direct reporting” that links Crown Prince MBS to Khashoggi’s killing as he dodges questions on why CIA Dir. Haspel wasn’t at Senate briefing.

When asked about MBS’s role in Khashoggi’s murder, Sec Pompeo says he’s read every piece of intel, and, “There is no direct reporting connecting the Crown Prince to the order to murder Jamal Khashoggi.”

After briefing Senate, @SecPompeo said that based on all the intelligence. “there is no direct reporting connecting the Saudi Crown Prince to the order to murder Jamal Khashoggi.” Asked why CIA Dir Haspel didn’t take part, Pompeo said “I was asked to be here and here I am.” pic.twitter.com/MWhl5OXOc5

The absence of any representative of the intelligence community from the briefing has angered Republican and Democratic lawmakers, who are demanding answers on what role Saudi Crown Prince Mohammed bin Salman played in Khashoggi’s murder. https://t.co/3uq5VSvItu

FLAKE is unmoved after the briefing, will still support Yemen resolution. Pompeo and Mattis argues against it.

Leaving Pompeo/Mattis briefing, Sen Flake R-AZ says he wasnt convinced by them, will still vote for War Powers resolution. Of MBS he says: “If he wasnt directly involved, he certainly knew of” plot to kill Khashoggi. Intel agents under his direction, “so that seems pretty clear”

WATCH: Sen. Jeff Flake is speaking after senators had a closed-door meeting with Pompeo and Mattis to discuss the death of Jamal Khashoggi https://t.co/ixxYL5ybfK pic.twitter.com/XrmBhwlxys