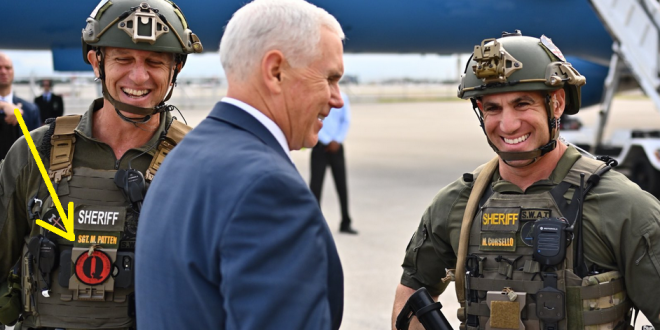 Vice President Mike Pence arrived at Fort-Lauderdale-Hollywood International Airport just after noon on Friday. He was greeted by a Broward Sheriff’s Office SWAT team that included one cop in a #QAnon conspiracy-theory patch.

#QAnon is, of course, the batshit-insane, 4Chan-based conspiracy theory that claims Donald Trump is secretly fighting a war with Special Counsel Robert Mueller to capture a secret, elite pedophile ring that includes prominent celebrities and Democratic politicians, including Hillary Clinton and Barack Obama.

Grateful for the courageous members of law enforcement who helped with my visit to Florida this afternoon. Thank you for everything you do to help keep our communities SAFE. Great to meet you! pic.twitter.com/QgPJhfJOOx