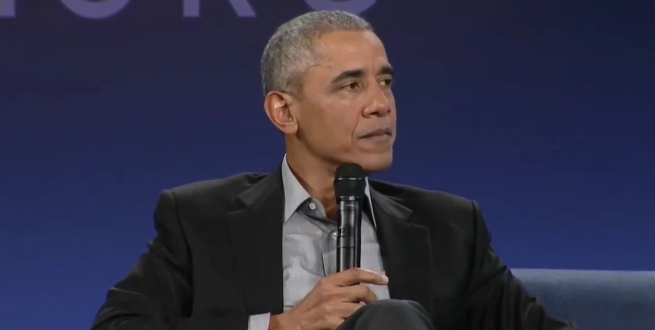 Former President Barack Obama said “racism” and “mommy issues,” among other contributors, were limiting the country’s ability to make progress on everything from education to climate change.

Obama, speaking at the Obama Foundation Summit on Monday night, said the answers already exist to solve many of the problems facing both the U.S. and the world, but that the nation was not making progress “because we are still confused, blind, shrouded with hate, anger, racism, mommy issues.”

The crowd laughed following Obama’s remark, which came as he was explaining why he thought less was being done to combat climate change.

A decade after he called the working-class “bitter,” President Obama is still trashing millions of Americans who disagree with him.

According to Obama, you’re “confused, blind, shrouded with hate, anger, racism, mommy issues” if you disagree with his environmental policies. pic.twitter.com/8IX79UIeeD

Previous Trump: I Can’t Imagine Anyone Else Other Than Myself Being Named Time Magazine’s 2018 Person Of The Year
Next Trump Has Submitted Written Answers To Mueller Team