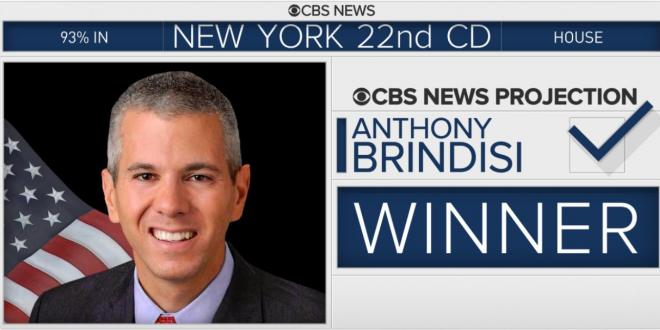 CBS News is projecting Anthony Brindisi (D) as the winner of the race for New York’s 22nd Congressional District, a seat currently held by Rep. Claudia Tenney (R). Brindisi has a 52 percent to 48 percent advantage with 87 percent of precincts reporting.

Tenney was elected to Congress in 2016, following the retirement of Richard Hanna. She beat out Kim Meyers and Martin Babinec.

Tenney is best known here on JMG for literally running from the press and shouting “fake news!” after claiming that “most mass shooters turn out to be Democrats.” Tenney was endorsed by the Log Cabin Kapos.