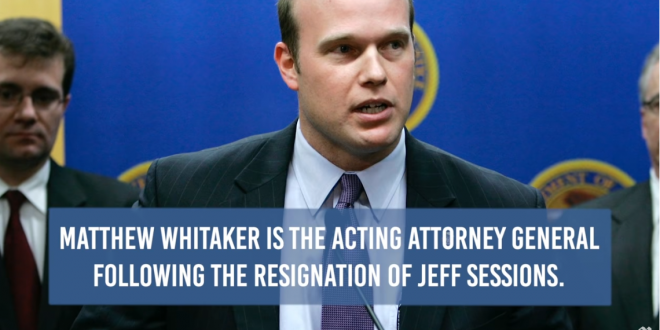 Our new acting attorney general was listed on the advisory board of a patent marketing company that federal authorities shut down as a fraudulent scheme that bilked aspiring inventors of millions of dollars and intimated that those who publicly complained might have to deal with a “security team” of Israeli ex-special forces operators schooled in Krav Maga.

Two months into his association with the firm, a subsequent statement quotes Whitaker saying, “As a former US Attorney, I would only align myself with a first class organization. World Patent Marketing goes beyond making statements about doing business ‘ethically’ and translate those words into action.”

The Federal Trade Commissioner took a dramatically different view in a 2017 compliant seeking a federal court order to shut down the company, saying it had bilked 1,504 aspiring investors of more than $25 million.

Back in 2014, a man named Scott J. Cooper started a business in Miami that claimed to help inventors turn their ideas into businesses by registering patents and helping with manufacturing. At least, that was the idea. According to a complaint filed by the Federal Trade Commission (FTC), Cooper’s business was what the FTC characterized as a “scam” that “bilked thousands of customers out of millions of dollars.”

According to the FTC, Cooper did his best to silence critics. In a warning email cited in an FTC complaint, the company told the story of kicking an inventor out of WPM’s office by their “intimidating security team, all ex-Israeli Special Ops and trained in Krav Maga, one of the most deadly of the martial arts.” Yes, that’s a real quote.

The company further explained that, “The World Patent Marketing Security Team are the kind of guys who are trained to knockout first and ask questions later,” FTC documents show.

In this Aug 2015 email, Trump’s new AG Matthew Whitaker threatens a victim of the patents scam firm that was paying Whitaker as an adviser. The firm was sued by the US govt and ordered by a court to pay $26m just 6 months ago. https://t.co/ooXGt1krVq pic.twitter.com/2y7zt4f7eP

In 2004, when he was age 34, despite not having worked as an AUSA, he was appointed, because he had the right political connections, U.S. Attorney in his Iowa District. He served until 2009.

In the 2016 Iowa caucuses, Whitaker supported Senator @marcorubio for president against @realDonaldTrump and the other GOP candidates (including the winner, @SenTedCruz).

Whitaker told me in June 2017 that he was flying out from Iowa to NYC to be on CNN regularly because he was hoping to be noticed as a Trump defender, and through that to get a Trump judicial appointment back in Iowa.