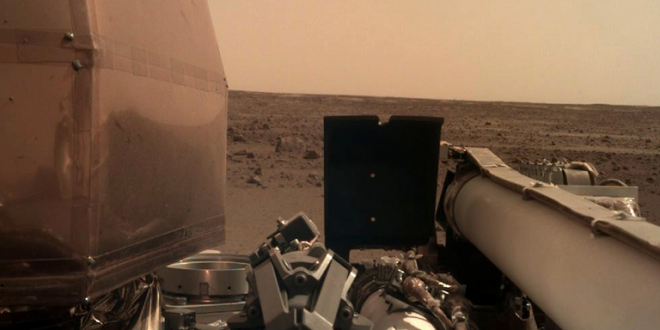 NASA has released the first image of the spacecraft InSight from the surface of Mars after it successfully reached the planet after almost seven months travelling through space. The Mars Odyssey orbiter relayed images of the spacecraft from its landing site, known as Elysium Planitia.

The US space agency tweeted one photograph, showing part of the InSight spacecraft and the Martian surface in the distance. The spacecraft took the image of itself from the red dusty planet, arguably making it the first selfie on Mars.

It was NASA’s eighth successful landing at Mars since the 1976 Viking probes, and the first in six years. NASA’s Curiosity rover, which arrived in 2012, is still on the move on Mars. The 800-pound (360-kilogram) InSight is stationary and will operate from the same spot for the next two years, the duration of a Martian year.

Aaah…soaking up the Sun with my solar panels. 🌞 After a long flight, and thrilling #MarsLanding, it feels great to get a good stretch and recharge my batteries. (Like, literally.) It’s just what I’ll need to really start getting in tune with #Mars. https://t.co/yse3VEst3G pic.twitter.com/LpsiI0KNNz