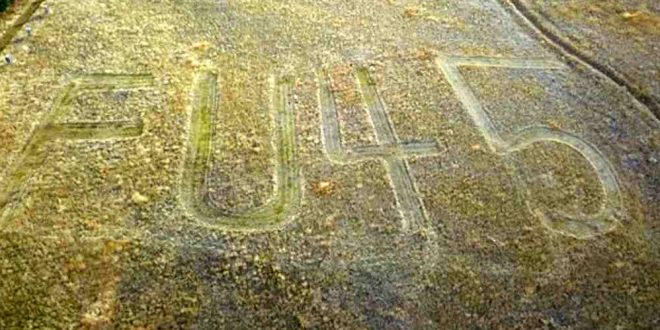 Kevin Crawford of Bozeman and Curtis Roe of Belgrade decided to protest President Donald Trump’s visit Saturday to the Bozeman Yellowstone International Airport in grass. The pair mowed “FU45” on Roe’s land under the landing approach Air Force One would make. The result was lettering 60 feet tall and 150 feet across.

Crawford said that seemed like a better approach than protesting at the campaign rally because “his wingnut base loves nothing more than to think they are pissing off a bunch of liberals who are protesting.” Crawford said Roe suggested they should do something to mark the occasion. They had a couple of beers and got to mowing, measuring by fence posts.

When Trump visited Missoula in mid-October, people in the town added a peach to the University’s “M” for “M-peach.” Others turned the L on Mount Jumbo into “LIAR” with large fabric letters.

“I saw that beautiful barbed wire going up,” Trump said at a campaign rally in Montana. “Beautiful sight.” https://t.co/lOj6lzRXEn

Previous Pirro: Why Do Liberals Hate Trump So Much? [VIDEO]
Next Kemp Accuses Democrats Of Hacking Attempt After They Raise Alarm About Voting System Vulnerabilities