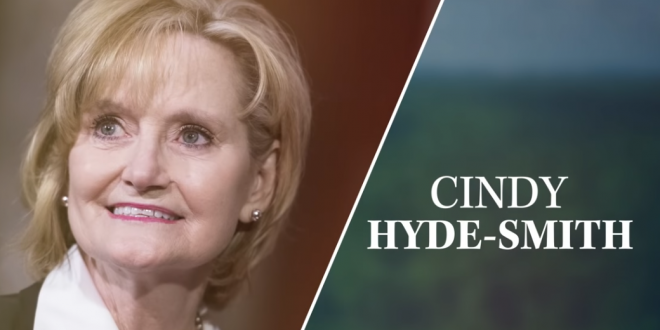 A newly published video shows Sen. Cindy Hyde-Smith, a white Republican from Mississippi, praising someone by saying: “If he invited me to a public hanging, I’d be on the front row.”

Hyde-Smith, who faces a black Democratic challenger in a Nov. 27 runoff, said Sunday that her Nov. 2 remark was “exaggerated expression of regard” for someone who invited her to speak and “any attempt to turn this into a negative connotation is ridiculous.”

Mississippi has a history of racially motivated lynchings of black people. According to the NAACP website, between 1882 and 1968, there were 4,743 lynchings in the U.S., and nearly 73 percent of the victims were black. Mississippi had 581 during that time, the highest number of any state, the site reads.

Hyde-Smith was appointed by Mississippi governor Phil Bryant to replace ailing senator Thad Cochrane back in April, but still had to win the special election to serve out the remaining two years of Cochrane’s term.

A onetime Democrat who switched parties in 2010 while serving in the Mississippi State Senate, Hyde-Smith is the first woman to represent Mississippi in the U.S. Senate.

In August, President Trump endorsed Hyde-Smith over another Republican in Mississippi’s State Senate, Chris McDaniel. McDaniel is an anti-establishment conservative who had been encouraged to run against Hyde-Smith by none other than former Trump adviser Steve Bannon.

“If he invited me to a public hanging, I’d be on the front row”- Sen. Cindy Hyde-Smith says in Tupelo, MS after Colin Hutchinson, cattle rancher, praises her.

Hyde-Smith is in a runoff on Nov 27th against Mike Espy. pic.twitter.com/0a9jOEjokr

Below is the Espy for Senate Campaign statement on Cindy Hyde-Smith’s “public hanging” comments: pic.twitter.com/zccgQelDWt