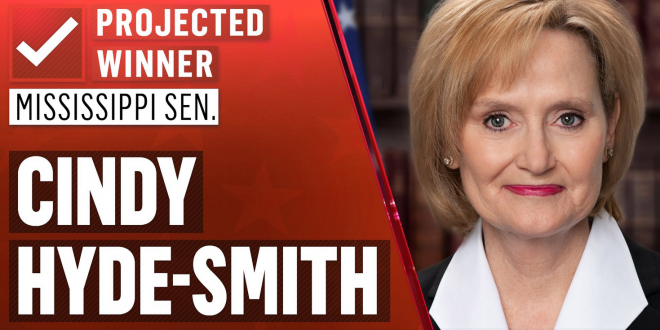 The GOP senator will defeat Democratic former Agriculture Secretary Mike Espy in the special election runoff, the final 2018 congressional race. Hyde-Smith will serve the remainder of GOP Sen. Thad Cochran’s term through 2020. She was appointed to succeed the ailing lawmaker earlier this year.

Hyde-Smith’s victory secures a 53-47 majority for Senate Republicans in the next Congress, which starts in January. Espy, who served as a U.S. representative from Mississippi and Agriculture secretary under President Bill Clinton, failed to overcome the state’s conservative leanings.

Previous Trump Slams His Own Financial Advisors: “My Gut Tells Me More Than Anybody Else’s Brain Can Ever Tell Me”
Next CHATTER AWAY: Overnight Open Thread