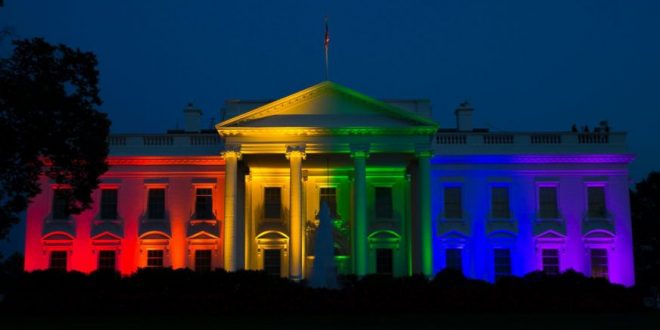 Michelle Obama: Malia And I Snuck Out To See White House “Lit Up In Pride” And Enjoy Celebrating Crowd

“Looking out the window, I saw that beyond the gates on Pennsylvania Avenue, a big crowd of people had gathered in the summer dusk to see the lights. The north drive was filled with government staff who’d stayed late to see the White House transformed in celebration of marriage equality. The decision had touched so many people. From where I stood, I could see the exuberance, but I could hear nothing. It was an odd part of our reality.

“We made our way down a marble staircase and over red carpets, around the busts of George Washington and Benjamin Franklin and past the kitchen until suddenly we were outdoors. Malia and I just busted past the agents on duty, neither one of us making eye contact. The humid summer air hit our faces. I could see fireflies blinking on the lawn. And there it was, the hum of the public, people whooping and celebrating outside the iron gates.

“It had taken us 10 minutes to get out of our own home, but we’d done it. We were outside, standing on a patch of lawn off to one side, out of sight of the public but with a beautiful, close-up view of the White House, lit up in pride. Malia and I leaned into each other, happy to have found our way there.” – Michelle Obama, from her hit book, Becoming.