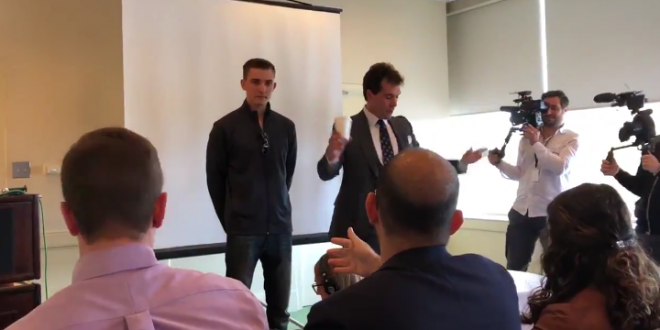 Jacob Wohl, who insisted his “default is not to believe women,” stammered through much of the conference, spending more time complaining about people making fun of him online than he did actually presenting a credible case for the allegations he was supposed to be announcing.

Nevertheless, Jack Burkman – whose fly happened to be down during this extremely important and serious event—insisted on calling the 20-year-old Wohl “a child prodigy who has eclipsed Mozart.” Oh, and did I mention their key presenter – the woman who was prepared to publicly claim she’d been raped by Mueller — was a complete no-show?

Had she been there, however, she would have heard a skeptical-to-the-point-of-mockery cadre of reporters ask Burkman and Wohl questions about if they were prepared for their FBI investigation, and why Wohl’s obviously fake website was, well, obviously fake.

One incredulous reporter asked, “A Washington Post story from that day says someone saw him at jury day at that day – are you suggesting the special counsel planted a story in the Washington Post?” The response was that sometimes a person goes “to jury duty but they’re also somewhere else.”

Mueller’s office had announced earlier this week that the special prosecutor in the Russia investigation has asked the FBI to investigate allegations that people tried to pay women to falsely accuse the former FBI director of sexual misconduct. Burkman and Wohl have adamantly denied trying to pay women to do such.

The 20-year-old Wohl, whose biggest achievement so far in life has been getting banned from trading for life by the National Futures Association as a teenager, has no experience in vetting and investigating rape cases. Burkman, however, attested to Wohl’s purported genius by calling him “a child prodigy who has eclipsed Mozart.” A heckler then replied that, far from being a genius, Wohl isn’t even allowed to open an eTrade account.

Wohl defended his decision to create a fake company by saying it was an attempt to preserve his anonymity. He did not comment on why his mother’s phone number was listed as the company’s number or why he used pictures of celebrities to create the online profiles of fictitious employees.

He did, however, berate reporters for having called his mother and younger sister. He also complained that reporters had photoshopped his image into a corn cob.

The two men said that the accuser’s name is Carolyne Cass, but they did not explain why the alleged victim agreed to have her name released publicly if she was too afraid to for her life to appear in public. Burkman has a history of promoting conspiracy theories and previous press conferences that he organized have unfolded similarly to Thursday’s event.

We had spent the previous day watching Jacob’s whole plan unravel in the most JacobWohlian way possible. What we didn’t expect though was just how utterly fucking shambolic the whole presser would be once we finally arrived at the Rosslyn Holiday Inn. It took us a while to find the conference room that Jacob and his pal Jack Burkman had taken from 11am to 2pm.

Then the show began, Burkman and Wohl distributed “literature” to the assembled press. A “raw intelligence document” from Surefire Intelligence, LLC and a printed out FBI press release about an event in New York City that Robert Mueller attended in 2010 while heading that agency.

Before giving the crowd adequate time to read it, Burkman announced the allegations were serious and then yielded the floor to Jacob. The accuser was not coming and was afraid for her life because…the press was invited to a press conference. Towards the end, Burkman “joked” that Jacob had an honorary law degree from Harvard. It did not seem like a joke at the time and Burkman’s later clarification met with groans from the assembled press.

The Jack Burkman/Jacob Wohl press conference is getting weird pic.twitter.com/VMwR5uqSsh

Jack Burkman and Jacob Wohl, supporters of U.S. President Trump, speak near an inflatable rat that was put up by a liberal activist at their news conference called to discuss their allegations against Special Counsel Robert Mueller in Arlington, Virginia. REUTERS/Joshua Roberts pic.twitter.com/1mAIOiR05J

and here’s the final moment of the press conference when Jack Burkman finally says “we gotta wrap it” to shouted questions pic.twitter.com/q74tH1XiLz