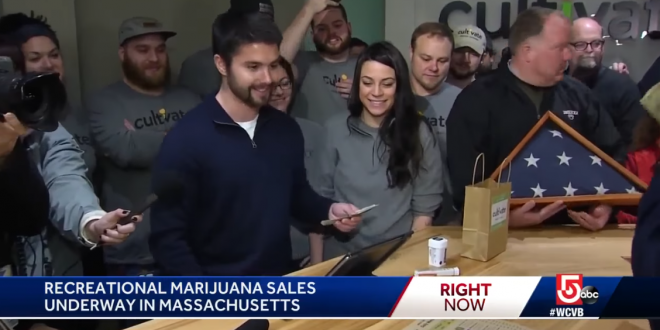 Hundreds of customers hoping to purchase marijuana on the first day of recreational sales in Massachusetts were waiting for hours in long lines Tuesday, despite the cold temperatures and rainy, overcast weather.

At the New England Treatment Access shop in Northampton, the wait time as of 11 a.m. appeared to be around two and a half hours. Hundreds — possibly even a thousand — customers were queuing up as of early Tuesday afternoon.

NETA officials said they expect a line all day long and another rush after work hours, but they warned that people who show up around 8:30 p.m. might not get to the front of the line before the store closes at 10 p.m.

The mayor of Northampton, Massachusetts was first in line to legally purchase marijuana at one of the town’s new dispensaries. “I think there’s a lot going on here in trying to bring marijuana out of the shadows,” Mayor David Narkewicz said.

Massachusetts voters legalized recreational marijuana in 2016, though it wasn’t until today, November 20th, that the first retail pot shops actually opened. Massachusetts is the seventh state to legalize marijuana and the first to open shops on the East Coast of the United States.

At NETA in Northampton, the wait time right now to buy marijuana is around 2.5 hours. And if you get there around 8:30 p.m. or later tonight, you might not get to the front of the line by 10 p.m. close. https://t.co/7Sed1KdFQq

There have been hours-long lines throughout the day at the two shops given the green light to sell recreational marijuana for the first time in Massachusetts: https://t.co/X59RP6YGxH