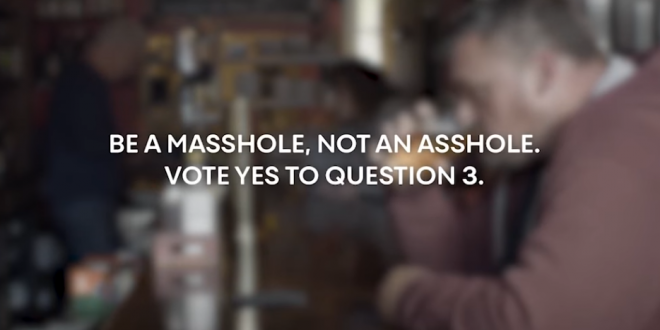 Massachusetts Ad Urges Against Repealing Transgender Rights: “Be A Masshole Not An Asshole, Vote Yes On 3”

If the word Masshole is good enough for the dictionary, it’s surely good enough for a political ad. But this still appears to be a first. A local group is using the colloquialism in an attempt to persuade Massachusetts residents to vote yes on Question 3, the referendum on the state’s transgender anti-discrimination law. “We’re Massholes, but we’re no a**holes,” says the Boston-accented, beer-drinking star of the profanity-laced commercial, which was posted online Thursday.

While appreciative of the group’s good intentions, the official Yes on 3 campaign is actually distancing itself from the ad — particularly the suggestion that those who want to rollback the 2016 public accommodations law are a**holes. “While it’s intended to be a fun take on the ballot question, we recognize that this is a serious issue and the Yes on 3 campaign rejects name calling,” Wilder said in a statement. “Our campaign is about dignity and respect for all people, including voters who are right now deciding how to vote on Question 3.”

It starts with a man in a red hoodie brooding over a beer. Then he launches into a speech about the rights our forefathers granted us. “We cut you off on the Pike and then we slow it right the f–k down. And then the second that light turns green, I’m honkin'” the actor says in a convincing Boston accent.

“Spoken like a true Masshole,” replies a gray-haired bartender, who the actor continuously calls “kid.” He continues to run through some of what you might call a Bostonians greatest hits: “We use our grandmother’s furniture to save our parking spots. We drop our Rs and put them back in words that don’t even have them,” he said.

And because no Massachusetts satire would be complete without a little Tom Brady shoutout, he adds: “And we’ll remind you who the f–king GOAT is every five minutes.”

I missed this when it launched on Friday, but the clip already has over 200,000 views. You’ll like this.