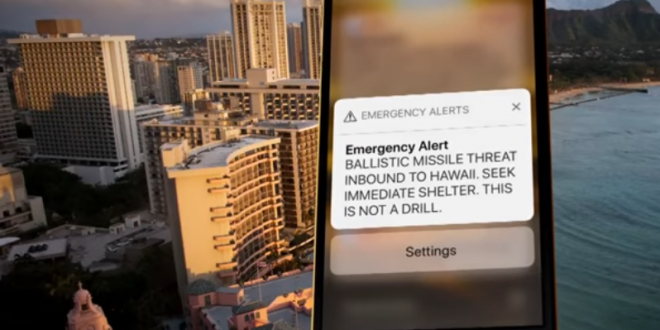 A man who suffered a heart attack shortly after Hawaii mistakenly issued an alert about a ballistic missile has filed a lawsuit against the US state. The false missile alert and the state’s failure to cancel it in a timely manner was a substantial factor in causing James Sean Shields’s heart attack on January 13, the lawsuit said. His girlfriend, Brenda Reichel, also joined the lawsuit due to suffering “emotional upset” from watching him almost die on several occasions.

In the 38 minutes it took to correct an alert about a false ballistic missile threat to Hawaii, cars were abandoned on highways and panicked residents gathered family members and desperately sought shelter as they waited for the world to end. Their lawsuit, which seeks unspecified damages, names the state of Hawaii and then-administrator of the Hawaii Emergency Management Agency Vern Miyagi.

From a January report by NPR:

It was 8:07 a.m. when the alert hit phones across Hawaii. Just two minutes later Gov. David Ige learned the alert was a mistake. Then, an additional 15 minutes passed. Only at 8:24 did Ige retweet the state’s Emergency Management Agency, which a few minutes earlier had clarified on Twitter there was “NO missile threat to Hawaii.” So, what was Ige doing during that quarter-hour? For at least part of that period, it appears he was trying to figure out his Twitter password.