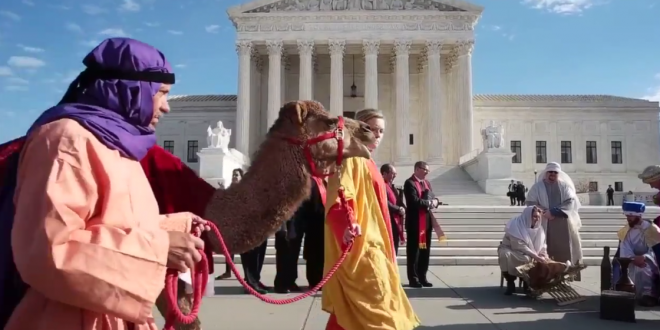 Picture this. Cars come to a halt and people stream out of their offices. Police officers stop traffic as a camel, donkey, and sheep accompany Mary, Joseph and the Baby Jesus dressed in first century attire and surrounded by the Three Wise Men and shepherds as they proceed around the U.S. Supreme Court and the Capitol!

That will be the scene on Wednesday, December 12 in Washington, D.C. starting at 11:00 a.m.! Faith & Liberty, Liberty Counsel’s Christian missionary and spiritual outreach in the nation’s capital, will present this ceremonial procession which begins across the street from the East Plaza of the U.S. Supreme Court and moves into place with the Court on one side and the Capitol on the other.

The account of that first Christmas night from the Gospel of Luke will be read from the Bible, word for word, without commentary. As a result, the revelation of the Son of God will be announced throughout Capitol Hill – and the seeds of faith are planted in the hearts and minds of those leaders who so desperately need to know God. Join us if you are in the area and please pray for this amazing opportunity to share Jesus Christ in Washington, D.C.

In a separate press release issued yesterday, Liberty Counsel announced the acquisition of the DC-based Faith & Action ministry, which they immediately rebranded as the Faith & Liberty group cited above. The screenshot above is from last year’s parade by the former Faith & Action.