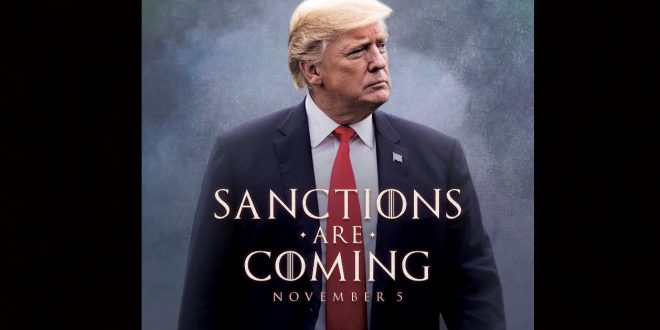 Shortly after officials from his administration announced the reimposition of sanctions on Iran, President Trump sought to drive the point home in a highly unconventional fashion: by tweeting out what looked like a poster promoting a new movie.

“SANCTIONS ARE COMING NOVEMBER 5,” it said, superimposed over a photo of a stern-looking president gazing into the distance. Both the typeface and phrasing were borrowed from the HBO medieval fantasy series, “Game of Thrones,” in which the motto “Winter is coming” signals the need for vigilance.

In an Esquire profile of Game of Thrones actor Kit Harrington last year, J.R.R. Martin was briefly quoted talking about how much he appreciated his famous work getting used as reference point for pretty much everything in popular culture.

And, speaking with Esquire, he compared Trump to King Joffrey, a villainous, petulant child who killed for sport and, presented with a decision, typically chose the cruelest path.

“I think Joffrey is now the king in America,” Martin told the magazine. “And he’s grown up just as petulant and irrational as he was when he was thirteen in the books.”

President Trump tweeted a Game of Thrones reference to warn about sanctions — and HBO isn’t pleased. GoT used “Winter is Coming” as its debut season tagline in 2011, and that particular golden poster font is from the show’s second season. EW has obtained a statement from HBO in reply: “We were not aware of this messaging and would prefer our trademark not be misappropriated for political purposes.”

When you wanna be Jon Snow but you're actually the Mad King.