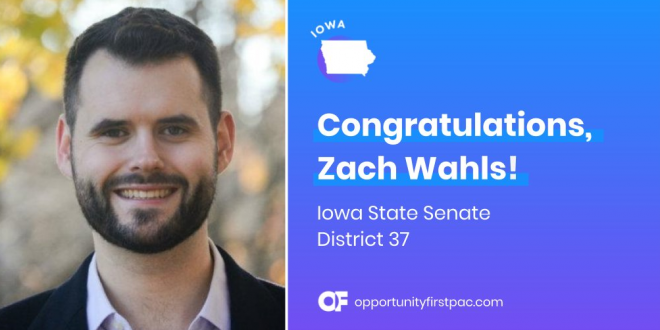 After Tuesday’s victory in the race for the District 37 state Senate seat, Democratic candidate Zach Wahls becomes one of the youngest faces in that body at 26.

In 2011, Wahls stood on the political stage for the first time with a speech in front of a legislative committee to argue against a proposed constitutional amendment in the state that would have banned gay marriage. A video of the speech went viral, amassing almost 2 million views in two weeks. Wahls has been an activist ever since.

Wahls’ speech was in defense of his moms.

You met Zach Wahls as the Eagle Scout with two moms who, still a teenager, testified for marriage equality to the Iowa state legislature. Tonight, just now, he became an Iowa State Senator himself. Congrats, @ZachWahls. You’ve done us proud. pic.twitter.com/7WTWqXkAXI

The #bluewave is crashing in Iowa — we’re excited to congratulate Zach Wahls as the next State Senator for #SD37! We’ve been with you on the campaign trail, and now we’re with you all the way to the State Senate as you fight for Iowa’s working families! pic.twitter.com/0ybIYAr6TP