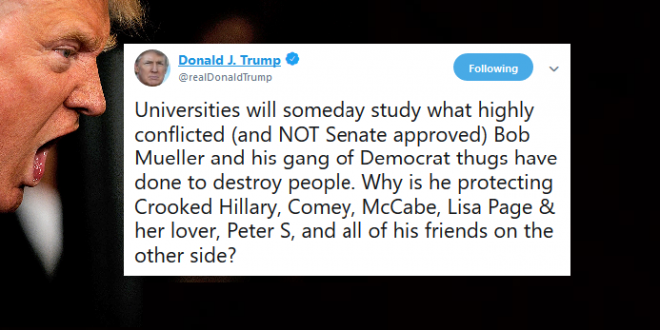 With midterm elections over, Mueller’s investigation has ramped back up. Trump, who last week sacked Attorney General Jeff Sessions for recusing himself from the Russia election tampering probe, naming a vocal probe-critic to be Acting AG, appears to be setting stage for the next step in his response.

Universities will someday study what highly conflicted (and NOT Senate approved) Bob Mueller and his gang of Democrat thugs have done to destroy people. Why is he protecting Crooked Hillary, Comey, McCabe, Lisa Page & her lover, Peter S, and all of his friends on the other side?

The only “Collusion” is that of the Democrats with Russia and many others. Why didn’t the FBI take the Server from the DNC? They still don’t have it. Check out how biased Facebook, Google and Twitter are in favor of the Democrats. That’s the real Collusion!

Before this morning, Trump had only tweeted once about Mueller since mid-September. He’s now tweeted today about Mueller and the investigation 3 times in 4 separate tweets.

Anyone else a bit concerned that the Senate and House are set to leave town today for almost two weeks, leaving Trump ranting about Mueller and Whitaker in charge of the Justice Department and the Mueller investigation?

In his attack today, Trump says Mueller “worked for Obama for 8 years.” Actually, Mueller, a Republican, was appointed FBI director by Bush and worked for him for more than 7 years. His 10-year term continued into Obama and was extended 2 years by both parties in the Senate.